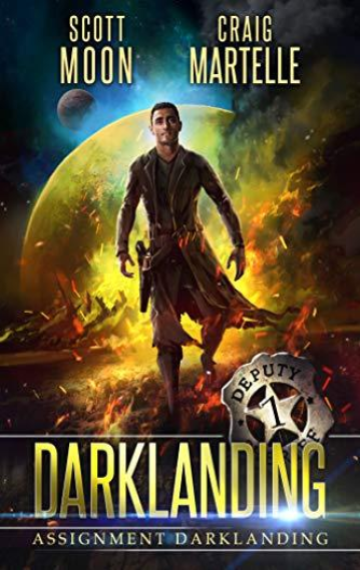 First In Series
$0.99Buy NowRead A SampleSee The ReviewsSee The Full Series

A frontier world. One Sheriff. And all the action one Spaceport can’t hold. Darklanding is the wild, wild west of known space.

Sheriff Thaddeus Fry will never completely leave the battlefields of Centauri Prime. His new assignment, the Sheriff’s office of Darklanding, could be a do-nothing job, or it could get him killed.

The first thing he learns is that his predecessor’s headquarters were bombed, creating the vacancy that led to his appointment. The Company Man, is not who he expected, to say the least. His new accommodations are right in the center of Darklanding’s misfits. He finds one native of Ungwilook willing to talk to him and tries to make him a deputy. What really matters on Darklanding, are the mines.

Faced with a dangerous collapse that could kill hundreds of workers, he leaps into action and gets the story of Darklanding started. Fans of Firefly, Bonanza, and Tombstone will love this new series.