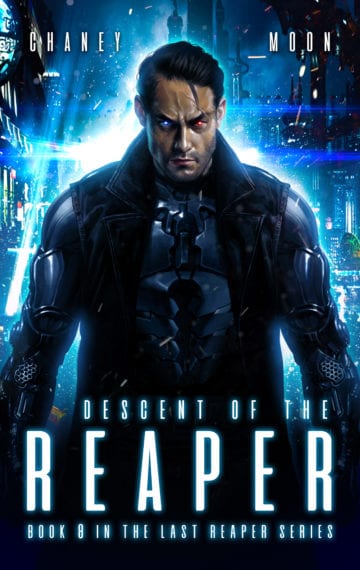 $3.99Buy Now!Read A SampleAdd To Your GoodReadsSee The Full Series

Not even the exodus fleet’s ancient enemies dare set foot on the surface.

When Cain’s friends make a daring assault on the dormant shipyard of an ancient civilization, he’s soon confronted with a nightmare made real.

How far will a guardian like Cain go to protect the people he loves? It has been a long time since he was ripped from his life and turned into a cold-blooded killer, augmented with cybernetic weapons, and sent down a path of destruction.

Now, he’ll seek redemption as well as a chance to save the exodus fleet from all of their mistakes. More than ever, the people of Wallach and Xad have become his people. There is a new home for them.

All he has to do is get them there.

Witness the eighth entry in the acclaimed Last Reaper series from Scott Moon and USA Today Bestselling author J.N. Chaney. If you’re in the mood for action, suspense, and a sarcastic artificial intelligence, then you’ll love this scifi thrill ride.