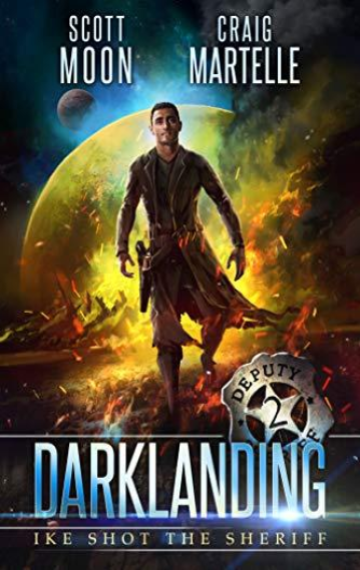 A frontier world. One Sheriff. And all the action one Spaceport can’t hold. The more Thaddeus Fry learns about Darklanding, the more he realizes he doesn’t know. Every day is a fight. The Company Man is little help. The moon-eyed madam. The purveyor of the Mother Lode. A parade of miners and workers. And Thad’s Unglok deputy.

There’s unrest among the miners. Desperation sets in for the Company Man. One wrong decision will destroy her career. The sheriff doesn’t care about any of that. There are strangers in town. One or all of them may be enemies. And how does a mysterious runaway fit into the picture?

Assisted by his friends and a strange pig-dog-thing that won’t stop following him, Thaddeus Fry must bring law and order to a frontier world completely unconcerned with justice or fairness. Gunfights solved problems. Or they didn’t. This time his adversary is stacking the deck against him to make sure Darklanding fails completely. Thaddeus fought a war in a harsher place against a more determined foe, but Darklanding is giving Centauri Prime a run for its money.

Fans of Firefly, Bonanza, and Tombstone will love this space opera / western and all the characters that make the story great. Pick your favorite and join us as we follow them through Darklanding Episode Two, Ike Shot the Sheriff.