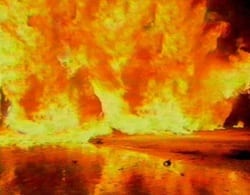 How many times have you seen a hero’s sidekick (we’ll call him Bad Luck Bob) get shot and die, only to learn that he was wearing a bulletproof vest? In a dramatic scene, after the villain is vanquished, the hero goes to his fallen friend. Bob regains consciousness and unzips his FBI windbreaker to reveal body armor with several neat bullet slugs in the fabric.

Getting shot while wearing a bulletproof vest is like being hit by a baseball bat, really hard, or so I’ve been told. Body blows don’t render people unconscious. More likely there would be a lot of screaming and writhing in pain, with a possible 300 cc bladder release thrown in to augment the indignity.

Tasers don’t knock people out, unless they fall and bump their head. A Taser works one of two ways. If probes are shot out and strike with sufficient distance between each other, an electric current (volts, not amps) travel between the contact points. All the muscle in this area suffers involuntary lock-up. No amount of moral fortitude can prevent this. It does not matter how many sit-ups you do or what your pain tolerance is. The muscles lock until the Taser ride stops. (Note: amps are what kill you, not volts.)

Having been Tased with probes, one in the upper back and one in the buttocks, I can attest to the irresistible force of this less lethal control method. The sensation is not so much pain, but a desperate, all consuming need for it to stop. I suppose it is painful, but it is hard to describe. Afterward, I felt good, as though I had done a really good stretch of my hamstring and back muscles. I don’t recommend trying this, however, because results may vary. Also, I did not feel the probes being pulled out of my flesh. My mind was on other things, such as not being Tased again.

The other method of Tasing is called the Drive Stun. This is when a Taser is pressed (driven) against a muscle causing pain compliance. This does not cause muscle lock-up except for the muscle being contacted. A person can still fight. Some will yield to avoid a second Drive Stun. Others will get mad.

Neither method causes a person to collapse neatly to the ground allowing the modern day super ninja to finish infiltrating the enemy bunker complex.

It is really difficult to punch someone out. If it were this easy to knock someone cold, MMA fights would not last multiple five minute rounds. Sure, it can happen, but don’t count on it. The same thing goes for clubbing a person on the head. Rendering a person unconscious by blunt force trauma to the head is a violent, potential deadly act. There will be blood.

I love the Walking Dead Series, but every person in the show who picks up a gun makes headshots from impossible distances, from moving vehicles, and while sprinting clear of the advancing zombie herd. No. This is ridiculous. (I let it go while watching the series because the tension and dramatic elements were so compelling, a bit like I never question the possibility of light-sabers.) The maximum combat effectiveness for a handgun is twenty-five yards, and if you are going to attempt a head shot while moving, you had better be a Navy Seal, and even then you had better be lucky.

Anyone involved in a knife fight is going to be cut to ribbons, even if they win. Edged weapons are too fast and too sharp. Knife fighting is not sword fighting. If you are close enough to use a short blade and your opponent has a similar weapon, expect to be cut—badly. (I would not recommend sword fighting either, especially with light-sabers.)

An explosion kills with over pressure long before the fire strikes. The blast pushes a shock wave of compressed air that can damage a variety of internal organs. Oh yeah, flying debris is bad news as well. Most people injured in tornados are injured by flying debris.

Virtually every action hero who has dived from an explosion should have been killed (fictionally, of course), even if they ducked the visually dramatic ball of flame.

However, being inside of a door that is breached with explosives is not very dangerous. The force of the breaching charge (explosion) presses extremely rapidly against the door (or wall) causing it to break, bend, or fall inward. The deadly over pressure is reflected back at the breaching team. Explosive breaching is more dangerous for the breachers than for the suspects inside.

This pistol pose has fallen out of style in modern movies. Holding a pistol near your face is dumb for so many reasons. I believe it is used in movies because it allows a nice face shot of the hero or heroine with the gun. Trained military and law enforcement professionals keep their weapons pointed in a safe direction until the need arises to aim at a target. They are carrying deadly weapons, not teddy bears.

Going into a burning building, especially modern buildings full of plastic and synthetic materials, without a self-contained breathing apparatus and protective clothing is suicide. Ask your local fireman. Fire quickly renders the air un-breathable and temperatures rise high enough to melt the change in your pocket in less than a minute. And every door or window you open feeds the fire oxygen. When a character in a book or movie rushes into a fire, it is best for the audience to suspend disbelief, because amateur firefighting is about as realistic as the Modern Warfare video avatar that can run for six hours in full gear without slowing down.