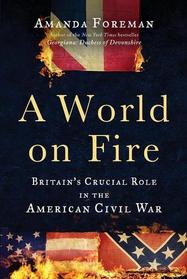 A World on Fire: Britain’s Crucial Role in the American Civil War revealed aspects of the historical period I hadn’t been exposed to in other books. The author, Amanda Foreman, describes key events I have read in other books on the Civil War, but also shows the surprising effect on England and other parts of the world.

I vaguely remember some of the stranger attempts at holding the Union together, but this book made my eyes pop open. Secretary of State William Henry Seward attempted a novel tactic at the beginning of the war, namely, he raised the specter of a potential foreign war in the belief the Confederate States would rejoin the Union out of a sense of nationalism. The potential disaster of this course of action can barely be imagined.

A World on Fire also recounts the tale of the CSS Alabama and how much of the world seemed fascinated by the ship and crew’s exploits. The book explained how many people in England supported the Confederacy despite their hatred of slavery.

I had also never read about Confederate operations from Canada, nor seen a detailed account of the conscription of English citizens on both sides of the war.

A World on Fire follows the lives of colorful characters, some noble, some not so much.

The audiobook version is narrated by Dean Robertson, who does a good job and is easy to listen to.

This is definitely a book to read. Civil War history has always interested me, and I plan to re-read previous books and search for new discussions of the topic.