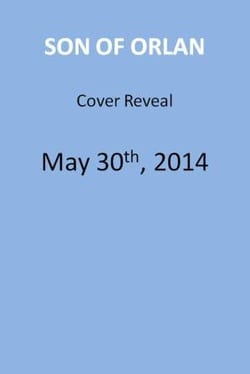 The second book in the Chronicles of Kin Roland series has been a long time coming. The first draft flowed through the keyboard like a gift from the imagination. However, I’ve dedicated myself to writing the best I possibly can. The Son of Orlan has been edited and revised more than anything I’ve published. The release date has yet to be set. I’m waiting on a final round of editor’s comments and beta reader feedback before finalizing the manuscript. (Samantha LaFantasie edited Enemy of Man, and has graciously agreed to do the same for book two.)

The new cover by probookcovers.com looks great and I can’t wait to share it. This Friday, the intensely visual artwork will be on display for Enemy of Man fans to drool over.

SON OF ORLAN
Kin Roland survived the Battle of Crater Town. He managed to keep his friends alive, though most remained at his side on Crashdown when the safe course would have been to evacuate with Earth Fleet. Kin even found the girl of his dreams.

Surviving Earth Fleet justice and a Reaper vendetta was only the beginning. Now Kin has real trouble.

With the  Grand Army of the Mazz Empire descending on the planet to destroy ancient enemies and Reapers sweeping across the landscape leaving terror and death in their wake, Kin learns the truth of his supposedly invincible enemies. The largest military expedition in history isn’t that of of a conquering force. The Mazz are on the run–fleeing extinction and Kin knows desperate enemies are dangerous.

Kin will find himself in a position no one expected. He’ll define humanity with his next choice, or doom them eternally.

If you are new to the series, please check out book one: Enemy of Man