A little over a year ago I realized that one of my friends on twitter was someone I actually knew in the real world. We talked a lot about writing through Twitter and occasionally meet to through around ideas about books, publishing, and stories. Josh was gracious enough to take on some beta reading work for Enemy of Man and I found his observations not only energetic, but helpful to the revision process.

Josh has also made great strides with his web site and building his social media presence, so although I have a head start in the realm of Indie publishing, I learning from him every time we talk. One thing you’ll learn about Josh Hayes is that he has an impressive writing routine and some great tools. Without further delay, let’s get to the interview. 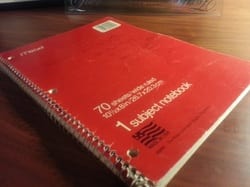 ﻿Scott: ﻿What was the first story you wrote?

﻿﻿﻿Josh: ﻿﻿The﻿ first story I wrote was a military science fiction tale called “The Final Frontier”.  I was about a genetic weapons experiment which went horribly wrong and proceeds to kill everyone and everything. Think Star Trek meets Aliens. I wrote it long hand in a red one-subject notebook, and it’s still tucked safely away in my box of Stuff-That-No-one-Will-Ever-See-Ever.

﻿Scott:﻿ That notebook looks familiar, I’m pretty sure I’ve got a couple from the good-ole-days. Next question, how long have you considered yourself a writer (and what convinced you that you were a writer)? 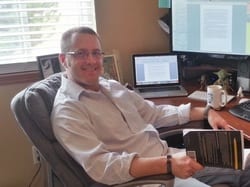 Josh Hayes, author of “The Watch”
Josh: You know that’s a good question. I’ve been writing stories in one form or another since I was 14 years old. I’ve read a lot recently about the difference between “writers” and “authors” and have concluded that no matter what, if you take the time to sit down and create something, you are a writer.

I consider myself an Indie Writer. I haven’t been able to give myself the title “author” yet, but only because I don’t feel like I’ve earned that. I think that if I ever become successful (and by that I mean if I ever make $100 on my writing and someone besides my closest friends read my work, then I’ll wear the “author badge” around like a first place ribbon.

Scott: This is one of those questions every writer dreads, but I have to ask; How do you find ideas for stories?

Josh: They just come to me, most of the time out of nowhere and usually when I’m not ready for them. I’ve had several light bulb moments when I’m in the middle of doing things that have nothing at all to do with writing. Thank God for smartphones.

﻿Scott:﻿ Tell us about your writing routine (so we can all steal it and become massively productive).

Josh: My routine, until recently, had been extremely sporadic. I would write for a few days or weeks then wouldn’t touch a keyboard for weeks or months on end. This year I decided that this was something that I really wanted to do and it was time to get serious about writing.

I work over nights, so usually I wake up around 10 or 11am, make a pot of coffee, scroll through some blogs and waste way too much time on Facebook, then after about my second cup I start pounding away at the keys. I keep track of my daily, weekly, and monthly word counts and set my daily minimum at 500 words. A couple of weeks ago I learned about the #1K1H Challenge on Twitter, which is basically just a game to write 1,000 words in 1 hour, and that has done wonders for my writing. I set a timer, turn everything else off (except my music) and type. It sounded daunting at first, but I’ve never not made the 1,000 work mark.

Scott: Sounds like some writing sprints I’ve tried on Twitter. Lots of fun, but I found myself drifting away from the rules of the contest, but that’s another story.

What is your favorite piece(s) of writing software?

Josh: I use Scrivener for writing and its sister program Scapple for outlining, planning and plotting. I’m a very non-linear writer and until recently was also a Panster. (That’s seat of the pants writer.) Scrivener allows you to write can keep track of multiple documents and scenes and chapters all in one program. The compile system has a steep learning curve, but once you figure it out, there is no better program for writing.

Scapple is just a huge blank document that you can brainstorm on: think of a black piece of paper and you’re just writing notes, circling them and drawing lines to other notes. I spent two days this week planning out a new science fiction series and after plotting out the first three books had well over 500 notes for the project. It’s extremely simple to you and very powerful. You can also drag those notes right into Scrivener and create your scenes straight from them.

Scott: Can you tell us about your current project?

Josh: Right now I’m working on two completely different projects. One is a main stream crime/detective novel, which I’ve put on the back burner for my new science fiction series. I plan for this series to have five parts, which I’m planning to release as they are completed, and each part will be around 20k to 25k words.

The project’s working title is “Second Star” and it’s a science fiction re-imagining of a classic children’s tale. It’s been something that I’ve been playing around with in my head for almost a year now, and recently got the thumbs up from the company that owns the original material to go ahead with the project. I’m really excited about it.

Scott: Cool. That type of thing seems to be catching on. Sounds like a blockbuster in the making.

Next question, what is your favorite movie?

Josh: Oh, man, this is tough. I’d have to say it’s a tie between Inception, The Dark Knight and War Games. “Would you like to play a game?”

Scott: ﻿(Laughing) ﻿What is your favorite book?

Scott: The Gunslinger is awesome. One of the first, if not the first, audio books I ever listened too.

Scott: What is your favorite song or album?

Josh: Anything by Breaking Benjamin.

Scott: Do you listen to music when you write?

Josh: I listen to dramatic movie scores, usually ones from science fiction movies. If I’m ever looking at a blank screen with nothing to write, I blare the soundtrack to Tron: Legacy and go about derezzing anyone on a Lightcycle.

Scott: Where do you see yourself in five years?

Josh: Hopefully doing exactly what I’m doing now, writing. With the possible exception of not having a full time job. I would love to make enough money to become a full time writer, but even if I only every make enough to pay my phone bill that’s okay with me.

Scott: If you could have one author give a blurb for your book, who would it be and why?

Josh: On man, of course I’m going to say King, but let’s be slightly realistic here: really any author who thought my words rated a blurb, I would be honored to accept their blurb. 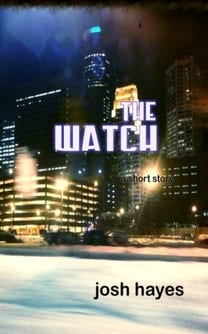 Scott: Do you have any unique ways of sharing your work with readers?

Josh: Right now, only have one short story available, which can be found on Amazon for $0.99 or for free on Noise Trade. I’ve also been invited to become one of the first writers to have work sold and promoted by a brand new company OpenBooks.com. The company should be up and running late this year and I’m very excited to work with them. Once I get the go ahead, I will be posting additional details on my website, but their business plan is groundbreaking.

Scott: I’m intrigued. Thanks for the interview. I look forward to more book talks. To wrap things up, I am putting a link to The Watch on Noise Trade here, and I also linked the picture to Amazon.