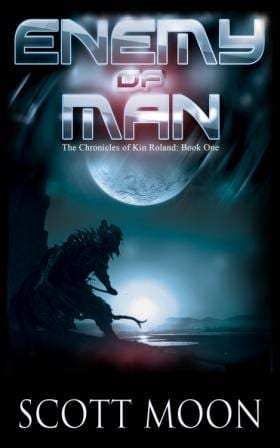 Everyone likes #free, right. There was a time, let’s say 2012, when Indie authors were using Kindle Direct Publishing free days to promote books. I was new to the realm of digital self publishing, and gave it a try. The result was about 18,000 downloads of Dragon Badge, an urban fantasy crime thriller, and over 2,000 actual sales. I thought it was pretty neat, since I was ecstatic to have people reading my first book! (Well, not the first I wrote, but the first I published on KDP. I’ve been writing for over thirty years.)

Dragon Badge also received fifty-three (53) reviews, with a 4.1 star average. Heady stuff. I assumed all my books would get reviews quickly. Enemy of Man currently has thirteen (13) reviews with a 4.4 star average.

We know everyone likes free, but maybe deeply discounted is also good?

The first thing I noticed when I published Enemy of Man, was that it immediately out sold Dragon Badge. There may be no way to understand the reason, but I think it is a factor of genre and the larger readership of science fiction. To be honest, Dragon Badge doesn’t fit neatly into urban fantasy or crime thriller, but I digress. I also think I learned a lot about writing during Enemy of Man, and the use of a professional editor helped a bunch. (Dragon Badge and Dragon Attack were proofread and edited by several individuals, including a trusted reader with a baccalaureate degree in English literature and a doctorate in education. Dragon Badge is scheduled for a serious re-write and at least one round with a professional editor before I start on book three of the series.)

And now to the point of this post; I didn’t do much in the way of free days for Enemy of Man. Why? All the book marketing blogs (and books–I’ve spent a small fortune on “how to market your ebook” material) suggested that the free day strategy had outlived it’s functionality. The biggest problem with giving away free books is that many people, myself included, tend to download more than can be read in a life time.

I still have more reviews for Dragon Badge than Enemy of Man. The later book has sold more copies with less promotional effort, but lacks reviews. Were the free days the secret to getting book reviews? Have people become exhausted with reading and reviewing so many independent authors? I’m not sure I will ever have the answer, but I do know I have at least a hundred books on my Kindle account that I won’t have time to read. It is safe to assume many other readers are in the same situation.

So where does that leave an indie title?
﻿
﻿The alternative to glutting the market with free books seems to have become the Countdown Deal. Amazon actually has a Countdown Deal Page, which is more than can be said about free books. I am keen to learn if KDP Free Days or Countdown Deals will boost Kindle Unlimited (KU) downloads of Enemy of Man and Son or Orlan…and dare I say it, the next two books in the series which should be done in 2015.

﻿﻿During the last two months, Kindle Unlimited sales have accounted for half my income. Occam’s Razor would suggest that KU must be part of my marketing plan. I think either Free Days or Countdown Deals would increase visibility and improve KU performance as well.

Shall I go with Free Days?

Or try a Countdown Deal?

The winner is, a KDP Countdown Deal starting on October 16th at $0.99. This is the first discount I have done for Enemy of Man for several months. It hasn’t been free for a year.

I hope this works.

I hope this get some reviews.

Several things have changed in my mark﻿eting plan during 2014. I spent a significant amount of money on an Orangeberry Blog Tour and a few other promotional sites with good reputations. I have not tried Book Bub, because I was saving that for the day when the series is complete. At that point, I plan to really follow the author marketing best practices and get serious about writing as a career. The results of spending money to promote have been decent. I think having a larger back list will make each dollar spent more effective.

So the big change is this; I save ninety percent of my profit for editing and book cover design. What does this mean for Enemy of Man in the free day / Kindle Unlimited experiment?

I need your help. Please share the news of the Enemy of Man free day with anyone you know who likes science fiction. October 16th, 2014 Enemy of Man will be $0.99 for a limited time.