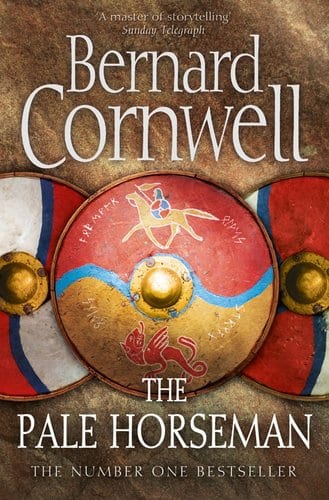 This is my third blog post regarding The Pale Horseman (book two in the Saxon series by Bernard Cornwell). I began with observations on character and the complex protagonist that is Uhtred of Bebbanburg. In summary, I found that while I liked Uhtred from the first book, I was developing a strong desire to punch him in the face, or worse yet, quit reading. I persevered, which is a good thing, as I will discuss later.

Now we have arrived at the payoff. Why describe the story arch and character development as a payoff? That makes it sound shady, doesn’t it?

Bernard Cornwell developed all of the characters in this book honestly, except for some of the cookie cutter priests–minor characters without much spine or depth. But I digress.

Uhtred, Son of Uhtred of Bebbanburg, is a twenty-year-old saxon raised from the age of ten by Danes (called Vikings when they are raiding from the sea). He’s seen his father die and fought in the shield wall. Over the years, his survival has depended on his own strength and cunning. He is proud, violent, and a pagan like the Danes who raised him. The tender years of his youth were spent looting churches and killing priests.

Why wouldn’t he be a total barbarian? (I’ve always liked barbarians in stories, but Bernard Cornwell has a talent for showing how brutal life was in the 9th century, regardless of who you were or what God / gods you worshipped.)

By the end of The Pale Horseman Uhtred earned much more of my compassion and made me want to see more of his journey. I cared about the people he cared about, admired his strength and courage, and began to hope he will reclaim his ancestral home of Bebbanburg.

Readers who enjoy George R. R. Martin (The Game of Thrones) or Ken Follet (The Pillars of Earth) won’t go wrong picking up a copy of The Pale Horseman.