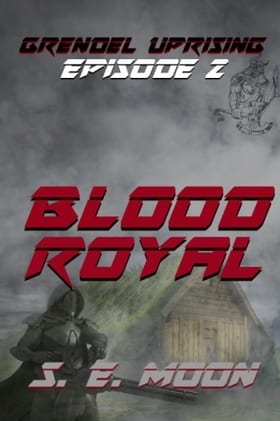 There are dozens of things a writer should do when releasing a new book or novella. I know this because, like many modern day authors, I have read all the books on how to self-publish and promote. I know that releasing a new title should be a huge deal with lots of bells and whistles, ARCs flung to all corners of the globe, and swag piled high. There should be pre-scheduled reviews and paid marketing on all the reputable sites for the genre.

Should be, but isn’t. Not this time.

I love the Grendel Uprising universe. Creating it has sparked some of the most fun I’ve had in years. I just can’t wait to share the story, so as soon as I satisfied my editor and did a final proofread, I started the upload process. Blood Royal, Episode 2 in the Grendel Uprising series, is now winging its way through cyberspace toward an Amazon outlet near you.

So let’s review. Proof Death is the first installment. Blood Royal is the second. The third, Heavy Weapons is a work-in-progress. The entire series has been outlined and is under constant development.

So without further adieu, please welcome Blood Royal to publication.

Loyal servants of the Earth System Commonwealth must pick a side. The assassination of Emperor Dan Uburt-Wesson has thrown civilization into chaos and no interim government will have the strength to hold the galactic empire together. Rumors of betrayal and rebellion spread from star system to star system as the real battle begins in the most unlikely place. Official news sources have (wrongly) confirmed that every member of the Imperial family is dead. The formation of a new galactic order is imminent. The Earth System Commonwealth has outlived its usefulness.

Only a handful of powerful people know that Aefel 70391, a decorated veteran of the First Armored-infantry Lightning Division, has located four juveniles that will change history. Can Aefel and his unlikely allies protect the Blood Royal? Has he chosen the wrong side?

Grendel Uprising: Blood Royal sets the stage for a war of rebellion, domination, and what it means to be human in the age of the Earth System Commonwealth.

The Grendel Uprising series combines science fiction and historical fiction. The setting is at once a world similar to England and Scandinavia during the time of the Danelaw and a pan galactic empire of advanced technology and deadly political upheaval. During a more prosperous time, entrepreneurs developed entire worlds as historical reenactment societies and allowed nature to take its course. Financial disaster took the planet of Grendel completely offline. There are precious few men or women who remember how they came to the alien world. Now they will face the godlike destruction of modern warfare.